What is Masitas de Puerco?

Masitas de puerco is pork cut into chunks, marinated (over nite if possible), then fried to a golden brown.  There are so many Cuban dishes that I remember the first time I ever ate them. Masitas de puerco is no exception. I had recently moved in with my Cuban boyfriend (now my husband).  Of course, I didn’t just move in with him, there was his parents (papi and mami), his two sisters, his oldest sister’s boyfriend and her two kids. I made number 9. That’s how you know they were Cuban right? 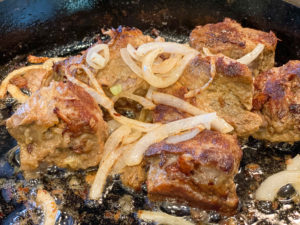 Anyways….I had come home from work and the smell was lingering outside when I got out of the car. I immediately think OMG that smells sooooo gooooood! As I open the door the smell gets even more powerful and I am instantly hungry. As I rush into the kitchen I see on the stove this big pot of masitas de puerco. I grab a fork to take my first bite. There was no time to ask what it was or how it got there. I just knew I had to try it! The pork was so tender on the inside with a little crunch on the outside and the flavor was exploding on my tongue.

Like I said when I wrote about Pollo Asado, mojo criollo (pronounced moh-hoh kree-oyo) is the secret weapon to this recipe.  Cuban mojo has a base of sour orange juice mixed with garlic, salt, oregano and cumin.  Sour oranges are called Seville oranges. If there are no sour oranges in your area naranja agria can be found at any Latin supermarket.

It seems like every Cuban family has a little different version of how they make mojo but the base is the same. Of course I am going to share with you how my husband’s family makes their mojo. Now that I am older and have seen other recipes I can tell you I think this recipe is heavy on the spices like cumin and oregano and that is what makes the flavor explosion.

Pork – Cut a pork shoulder  into 1 1/2″- 2 ” pieces. Pork loin or country style pork ribs can be substituted. You can cut the meat into smaller pieces too but when frying if they are too small then the pork overcooks easily.

Mojo Criollo – Store bought mojo criollo can be substituted. If you choose store bought use it as a base and still add fresh smashed garlic, a little more salt, cumin, oregano and lime juice.

Frying – Using lard is traditional but when I don’t have any vegetable, corn or canola oil can be substituted.

No matter which side of beans and rice you choose don’t forget the avocado salad and maduros (fried plantains). 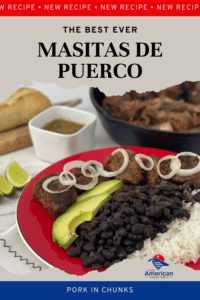