What is a Frita Cubana?

A frita (free-tah) cubana is the Cuban hamburger. The patty consists of ground beef and pork and sometimes chorizo. It is topped with shoestring potatoes stuffed into a soft bun.

The frita cubana dates back to the early 1900’s. They were sold out of carts on the streets of Havana using stoves fueled by propane. Quickly and affectionately the people who made these delicious hamburgers were called friteros.

According to The Providence Journal there is some debate about whether the hamburger is entirely a Cuban creation or if there was some American influence. The hamburger ingredients could definitely be a recreation of the classic sofrito sauced picadillo. However, others say putting a round meat patty inside of a bun definitely speaks to American influence. Before the revolution Cubans and Americans were travelling freely back and forth from country to country.

Either way, Cuban hamburgers became the national snack. They were enjoyed after baseball games, after a movie or late at night after a cabaret show.

Then after the revolution and Castro took over friteros and their carts slowly disappeared. Ground beef was hard to find and the hamburger became obsolete. It didn’t entirely disappear though, because it later re-emerged in the United States.

In 1961 Dagoberto Estevil opened the first frita shop in Miami’s Little Havana. It was an instant success and more and more frita shops began to open.

Victor Benito Gonzalez opened his restaurant called El Rey de Las Fritas which means King of the Fritas. It is still in business today and has been featured on many tv shows and even visited by Barack Obama.

How to Make a Frita Cubana

Can I put Other Toppings on My Frita?

Yes, other toppings include:

I am going to show you the classic version of the Frita Cubana. Also, I am using 2 burger sauces. The first sauce is to be used while the burgers are cooking. To make it easier I recommend putting the sauce in a squeeze bottle. While the burgers are cooking simply squeeze some of the sauce on and watch how it caramelizes around the edges and onions. My mouth is watering just explaining it to you! The second sauce is to be slathered all over your bun and adds a second element of flavor that you will be thanking me for. 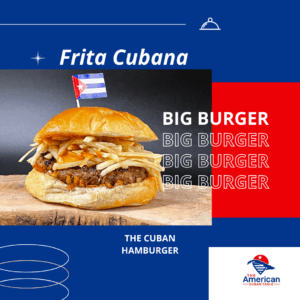