The Spanish word for meatballs is albondigas. Albondigas are small meatballs made of ground meat and rice.

Traditionally, they are served in soup. A broth-based soup loaded with vegetables. Some recipes have potatoes some do not.  Most of the recipes found online are also traditionally Mexican. It is really hard to find a Cuban recipe unless you specify. Please, don’t get me wrong, I love albondigas soup too. However, today…….

I’m going to show you how to make Cuban albondigas.


What are Cuban Albondigas?

What is a Sofrito Sauce?

A sofrito sauce is made with Spanish onions, green bell pepper, garlic, and tomato, (or tomato sauce) cooked in olive oil. It is a the starter to so many delicious recipes such as ropa vieja, chicken fricassee (fricase de pollo), and even pastelitos de carne.

Why do I think you will like my recipe over others? Because most of the recipes I looked at have ketchup. I don’t use ketchup. I make a traditional sofrito with tomato sauce.

Sharing is caring! Below is a Pinterest friendly photo…. 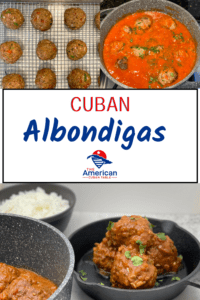